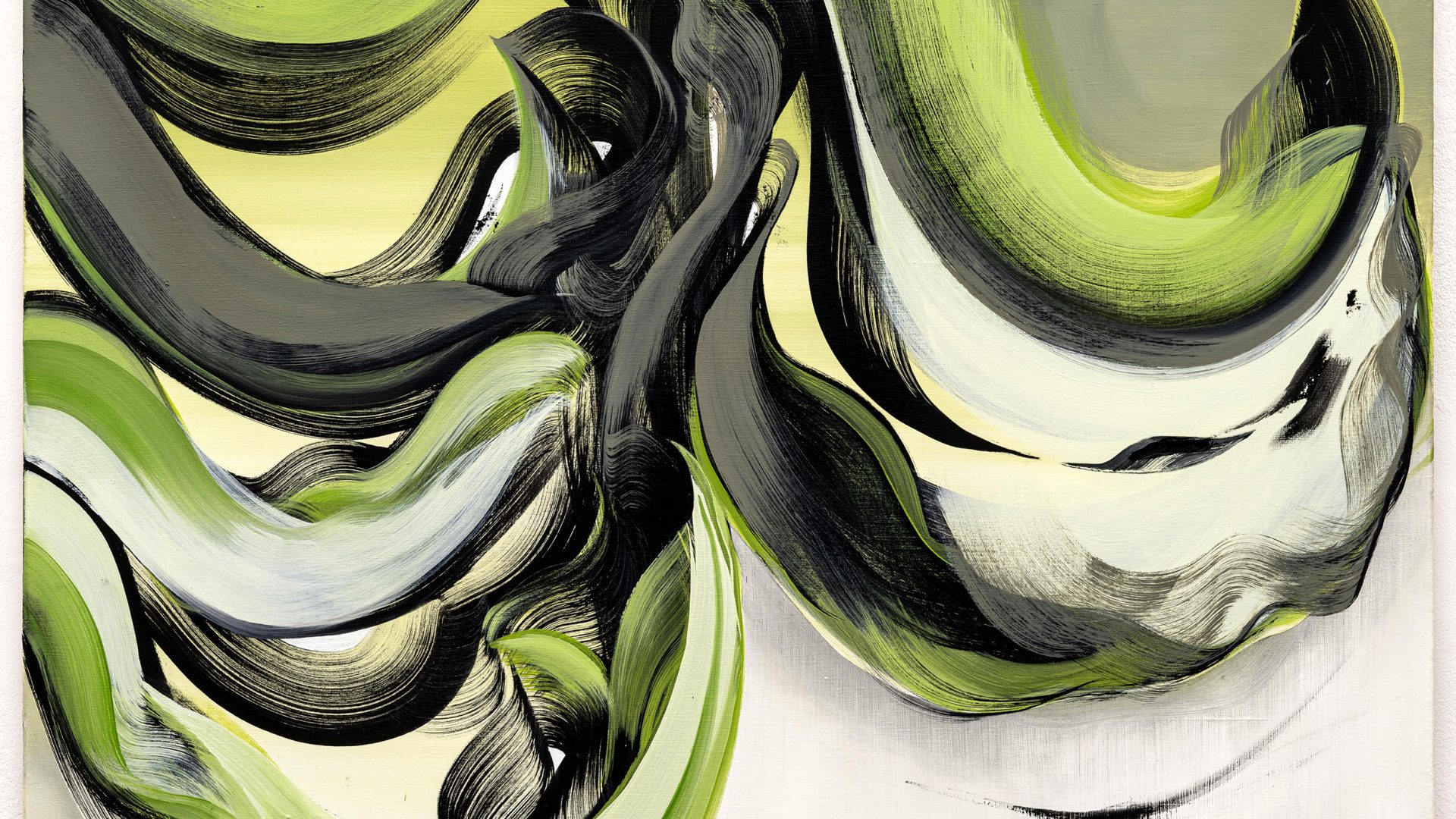 The red lines sway on the canvas. They are like leaves that seem to open and come to life due to their different colour intensities. They grow, blow and create their own path in front of my eyes. At the same time, they remind me of tentacles of an animal that lives deep in the sea. The light pink residual space, becomes its own shape on the canvas, that plays an equally important role and merges into the red. This makes that I can’t distinguish the foreground from background. I seem to recognise shapes, but I can’t place it.

It is clear that Janine van Oene (1988, NL) tried to find the definite shapes in her new series of paintings layer by layer. I believe that the meaning of what I see lies in this search. Not the visible image or the meaning is important, but moreover what the paint does: the way in which the acrylic shines, the brush stroke bends or the colours react to one another. These components of the painting are focal, not just for me as a viewer, but also for Van Oene during her process. In her studio she always works on different paintings simultaneously. After carefully deciding the right colour, she places it on the canvas in one fluid calligraphic movement, the thickness of the line depending on the paint brush. As soon as the stroke has been placed, she takes a step back to view her work. What does the line do and which next step does the painting require? How do the colours interact with each other? Afterwards, the paintings in turn get an addition. By working this way, Van Oene always finds herself deep within the process of creating and is open to where ever this leads her. She does not always stay fully in control, but allows intuitive and associative interventions. This brings her to new shapes and lines that she could not have fathomed beforehand.

When I look at the new shapes, they remind me of figurative objects. On a big blue canvas, I can see a clear, white surface. The lines that surround it, remind me of coral or of soft, white orchid leaves. This moment of recognition in the image is important. We have the tendency to relate recognisable images to shapes; that what we see, we want to place. But when I look at the shapes on Van Oene’s paintings, I sometimes see a leaf, a shell or a tentacle, yet they don’t resemble it exactly. I can’t immediately provide the images with meaning even though they feel very familiar. This is why I can’t stop looking and I get sucked into the canvas. In this new series of paintings, Van Oene will constantly play this game of abstraction and finding figurative meaning in it.

This is visible on the canvas where the black, lilac, orange and light blue colours glide from the bottom right corner to the left top corner. The lines dance and alternate from subtle, refined brushstrokes to thicker lines. As seaweed that sensually moves with the water stream. The shapes and colours intensify each other on the surface. Yet I can’t see which line was Van Oene’s starting point and where she ended. For me that symbolises the core of her paintings. Even though, I can see that she has gone through a quest to find the right image, I can’t decipher which path the painting has travelled on. Because the new and unfamiliar shapes feel like they have always existed; they are fundamentally part of the here and now.

Janine van Oene (1988, NL) lives and works in Amsterdam (NL). In 2014 she graduated from the HKU University of Arts in Utrecht, the Netherlands, and was a resident at De Ateliers in Amsterdam from 2014 to 2016. In 2017 Van Oene was selected for the Prospects & Concepts of the Mondriaan Fund, and was awarded the Dutch Royal Prize for Modern Painting. The work of Van Oene is at home in various collections, such as De Nederlandsche Bank, KMPG, The Royal Art Collection and ING Art Collection, AkzoNobel, among many others. 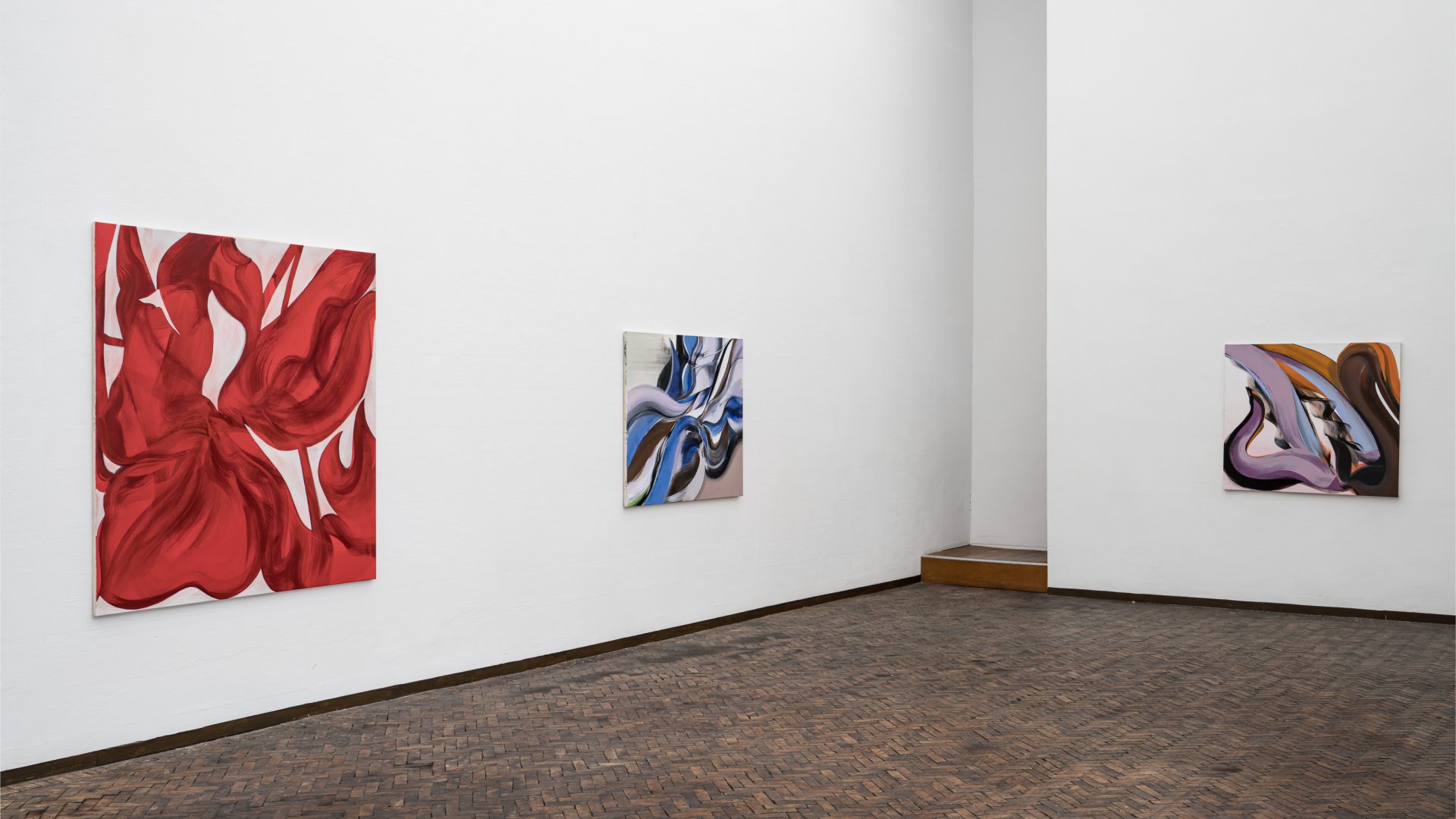 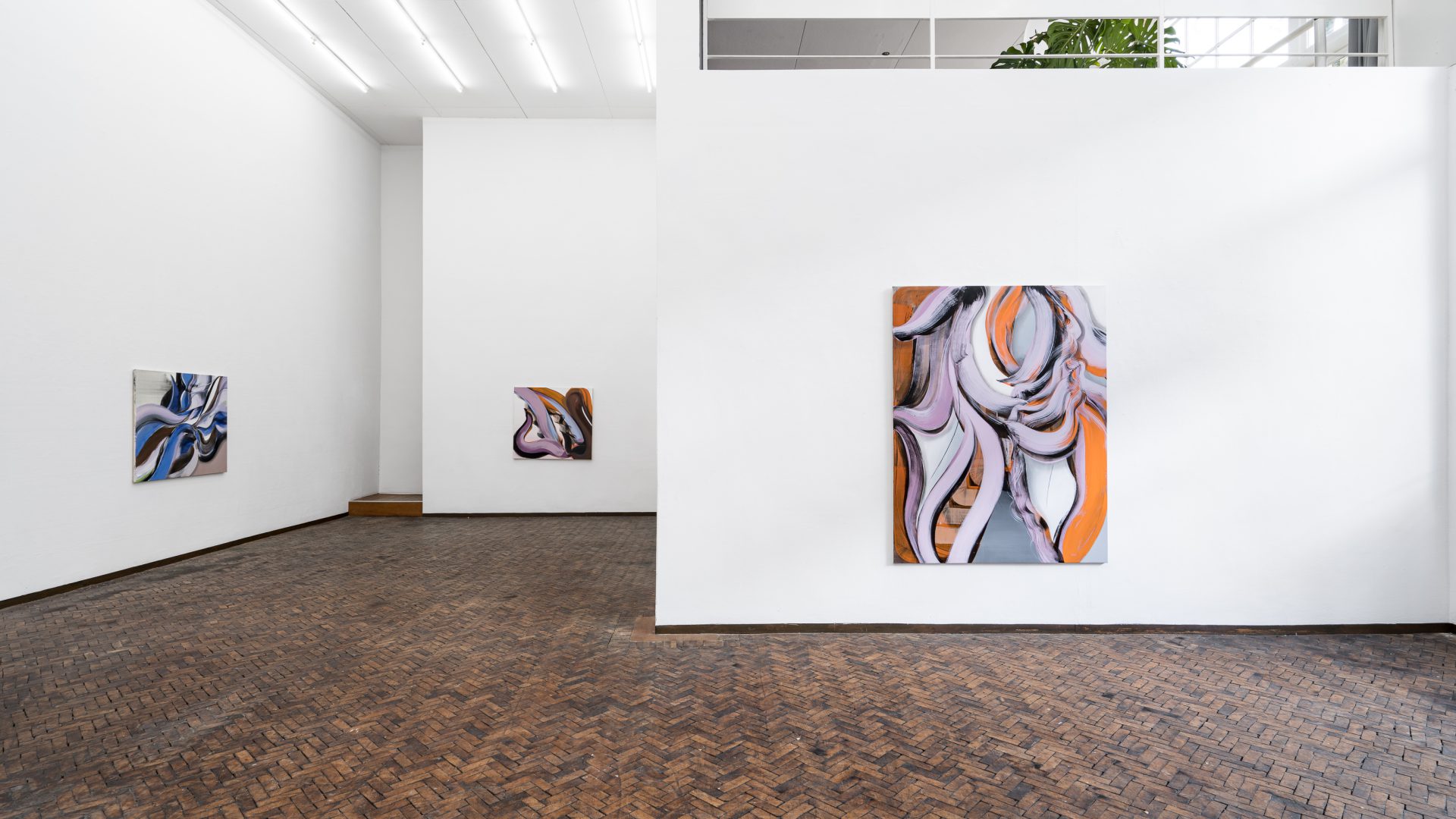 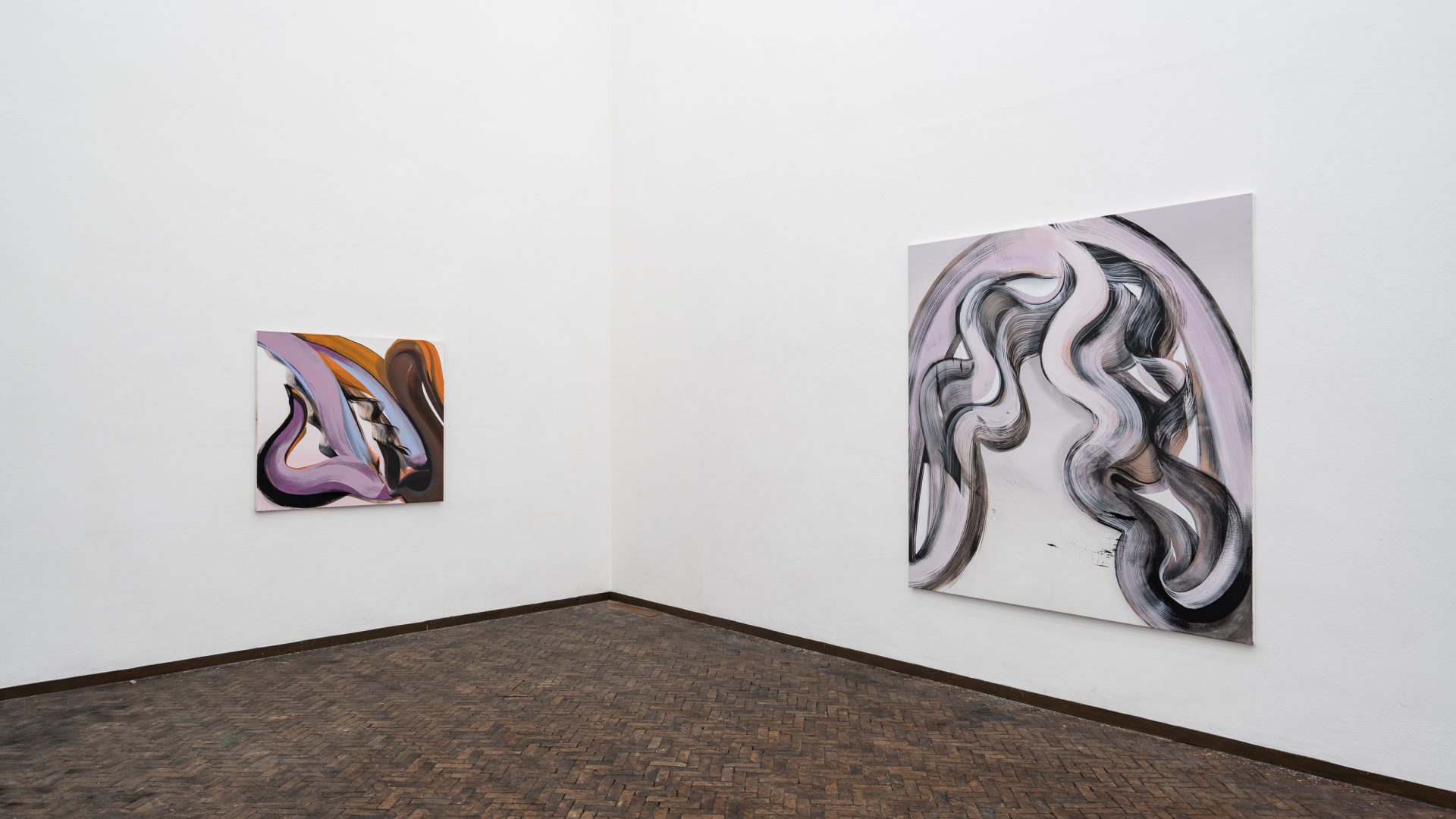 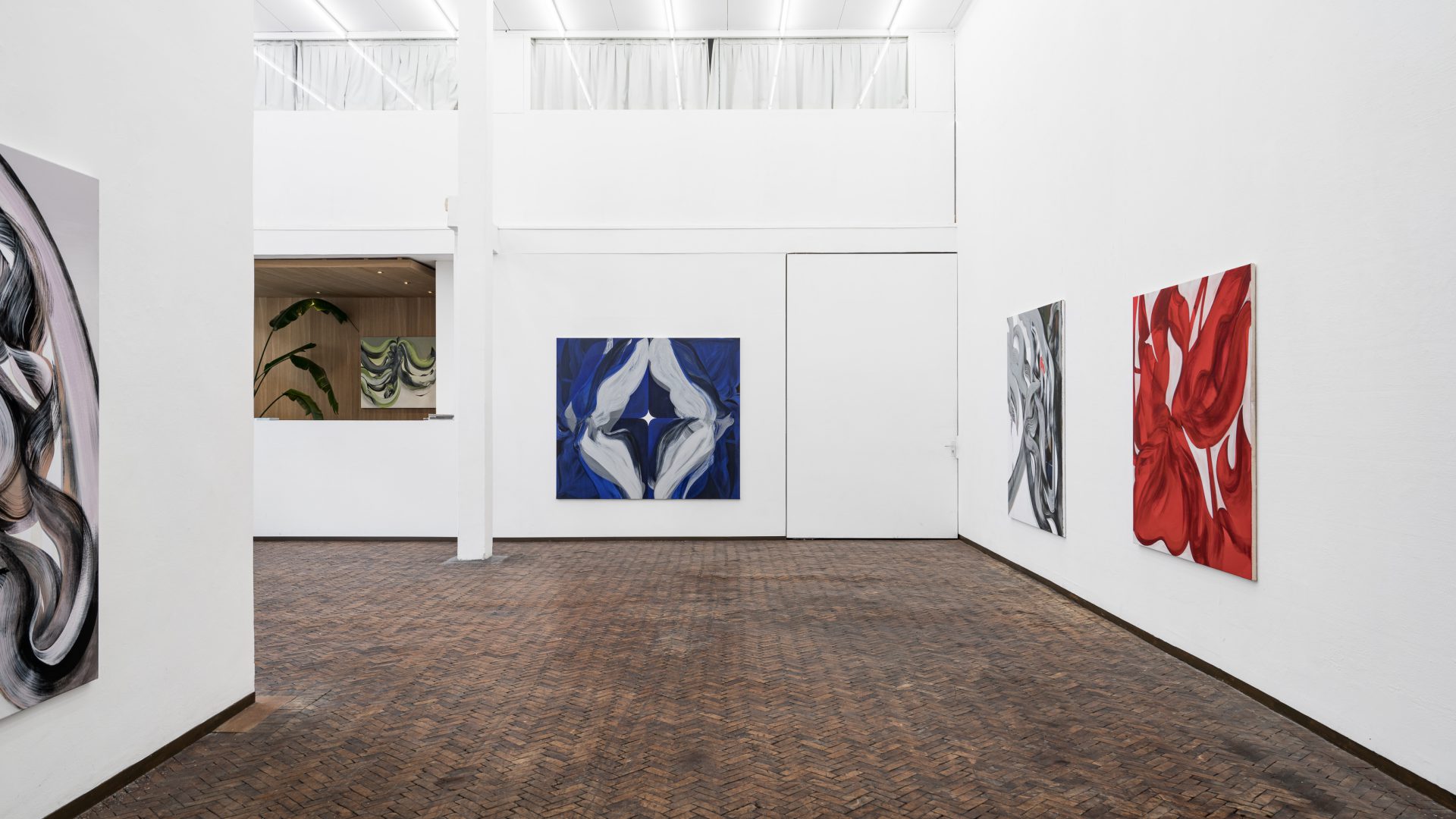 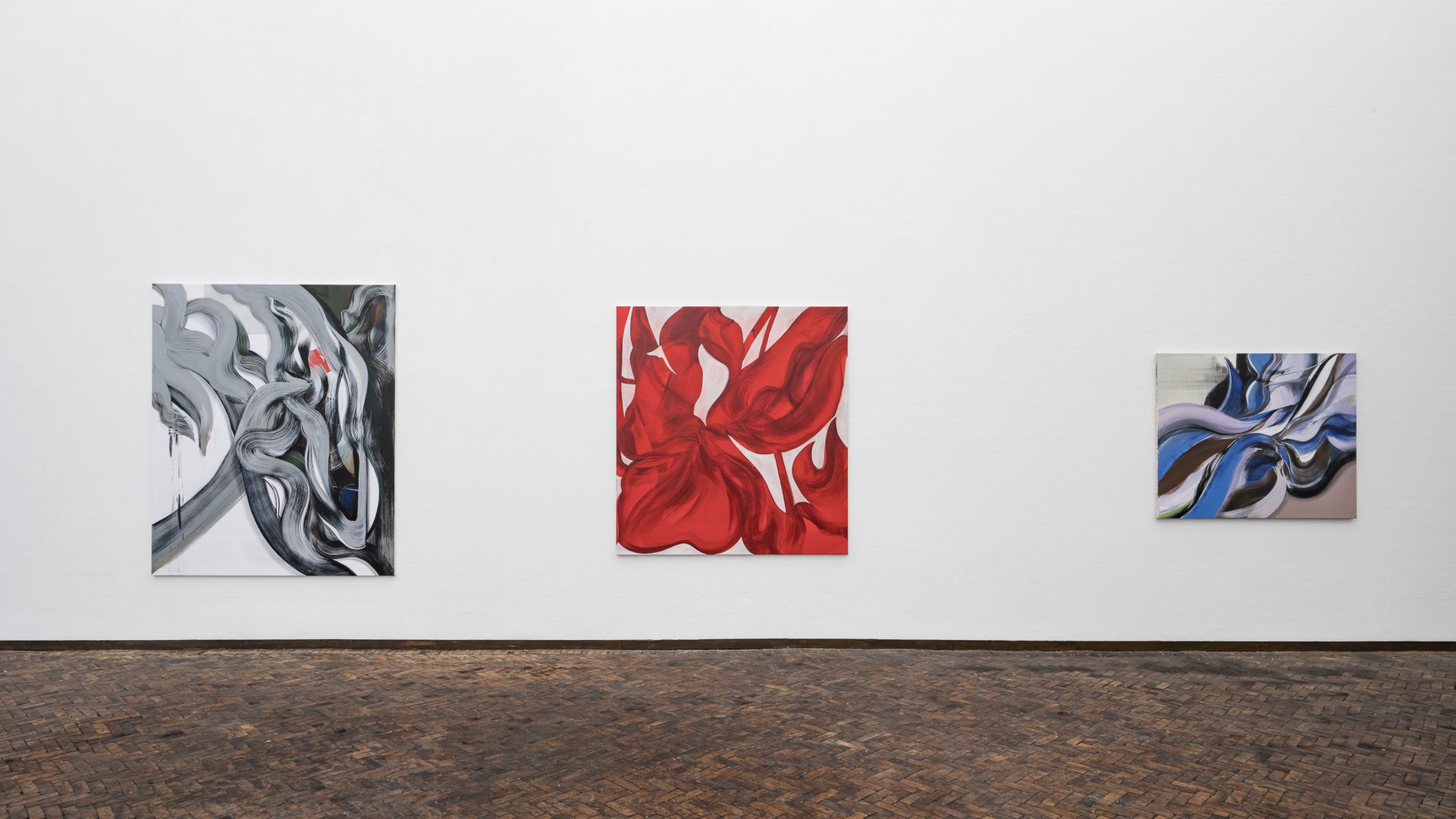